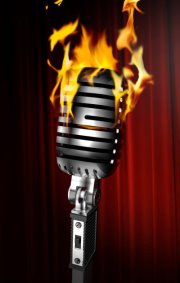 Ruthless Hippies have been slacking this week…which more or less means we’ve been busy doing things that pay the bills. We hope some of you might still be without plans tonight and see this super last minute post on a super awesome poetry event tonight.

As you may know, every First and Third Thursday of the month, 9 PM at North Park’s Eveoke Dance Theater (2811-A University Avenue, San Diego, California) is the poetry event known as Elevated, which brings out some of San Diego’s heavy hitter slam poets. Tonight’s is a special edition pitting LA and SD based slam teams against each other in a highly competitive scrimmage before the Poetry Slam Nationals. Read on for more info from their Facebook event page…

“Get ready San Diego…we are about to have the meanest, toughest, knockout, drag down poetry slam of the year. The Battle for San Diego will be an epic showdown of words…4 teams spitting hot fiyah in 4 rounds! Da Poetry Lounge (longest running spoken word open mic), Elevated! (San Diego’s premiere open-mic), San Diego Slam Past (former members of the SD slam team), and the Xkadoosh (IE Brave New Voices team). The teams feature some of SoCal’s best and brightest spoken word talent. This is our last tune up…
before heading to Charlotte, NC to compete in NPS 2012.

The Slam will be hosted by San Diego Slam veteran Ant Black and DJ Gil SOTU will be rockin the 1’s and 2’s.

This will be a fight to the last word!

The proceeds from this show will help the team get to Charlotte. Doors open @ 9 pm (get there early)
$5 cover at the door

Donations to the team accepted anytime!!!!!”

Help the SD Slam team with donations. Best believe you will leave this event feeling elevated.

02 Aug This entry was written by summerfunonthe101 and published on August 2, 2012 at 5:18 PM. It’s filed under Uncategorized. Bookmark the permalink. Follow any comments here with the RSS feed for this post.