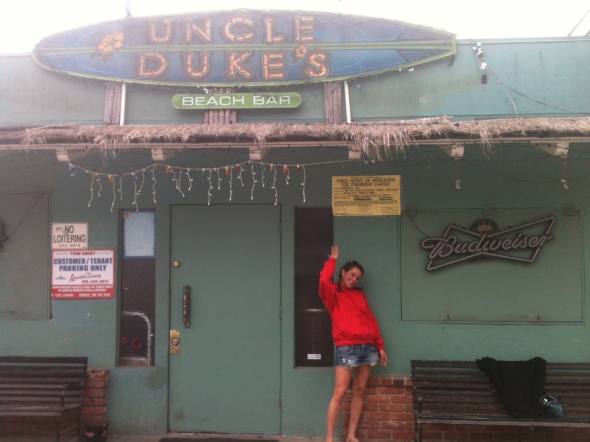 Boy, 2012 has been a rough year for north county dive bars. Just this spring we’ve seen Mccaffrey’s Pub in Solana Beach and Yogi’s in Cardiff shut down with plans to open under new ownership. Bar Leucadian, once a hub for live music, has mysteriously stopped all entertainment and begun shutting down early.

And now, according to a Diana Street resident, this change of ownership sign was posted yesterday at Uncle Duke’s: 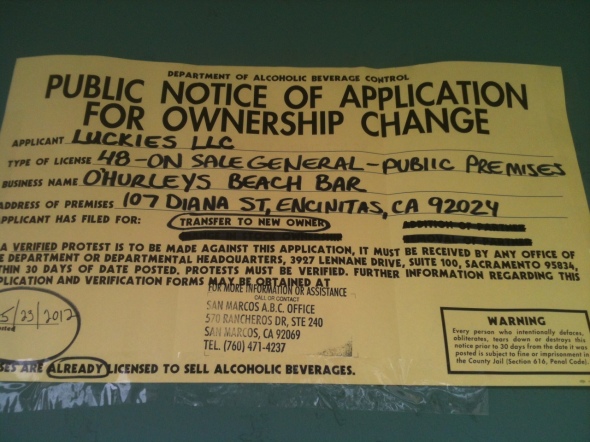 According to Carl, the bar’s current owner and manager, the whole escrow process with the ABC involved  is ‘back-assward’.  The new owners (Luckies LLC) have to go through a 90 day period of background checks, paperwork, signing away their first borns and things like that before they actually take the reins. So the derelicts of Diana Street can look forward to at least 89 more days of  North County’s most crap-tastic dive bar, Uncle Duke’s.

And as for Carl, he’s getting the hell out of dodge, with plans to start a new business in a tropical locale.

This has been on the scene reporting by Ruthless Hippies.

24 May This entry was written by summerfunonthe101 and published on May 24, 2012 at 1:33 PM. It’s filed under Uncategorized. Bookmark the permalink. Follow any comments here with the RSS feed for this post.

Older: Summer Fun on the 101: help us find this year’s lineup and win a T-shirt
Newer: Memorial Day Music worth your while